In a previous post a couple of years back, I was marvelling at the multiplicity of names by which this woman lived. Yes, I was able to definitively prove that Cleone de Heveningham Benest,  Cleone de Heveningham Griff, Cleone Griff, Miss C. Griff and Miss Clayton Griff were all one and the same person. I have never found any living relations, nor any clue as to why she used the rather masculine-seeming name of Clayton Griff for a period in the middle of her life. So that remains a mystery. However we do now know a good deal about her life and work as an engineer and metallurgist.

Cleone de Heveningham Benest (also known as Miss Clayton Griff or Miss Cleone Griff) (1880-1963), motorist, engineer and metallurgist, was born on 13th June 1880 in Forest Gate, London E7 to George Philip Benest (1853-1930?) and his wife Edith Maria (nee Powell, 1857-1930). Almost immediately her mother took her to live with her parents Thomas and Eliza Powell at St Aubin, Jersey, and Cleone’s father, a landowner, seems not to have been part of the family from then on.

In her Lanchester Tonneau

By 1891 she, her mother and maternal grandparents were living in Ryde, Isle of Wight and by her early twenties she was already well-known as a pioneering early female motorist with her own vehicles. She had a home workshop equipped with a Drummond lathe (perhaps one of their smaller models) and other essentials enabling her to care for her own cars and even build a small steam engine. She owned two cars: a 1906 12HP Lanchester tonneau, (DL154) and a 12 HP Fiat (LB854). 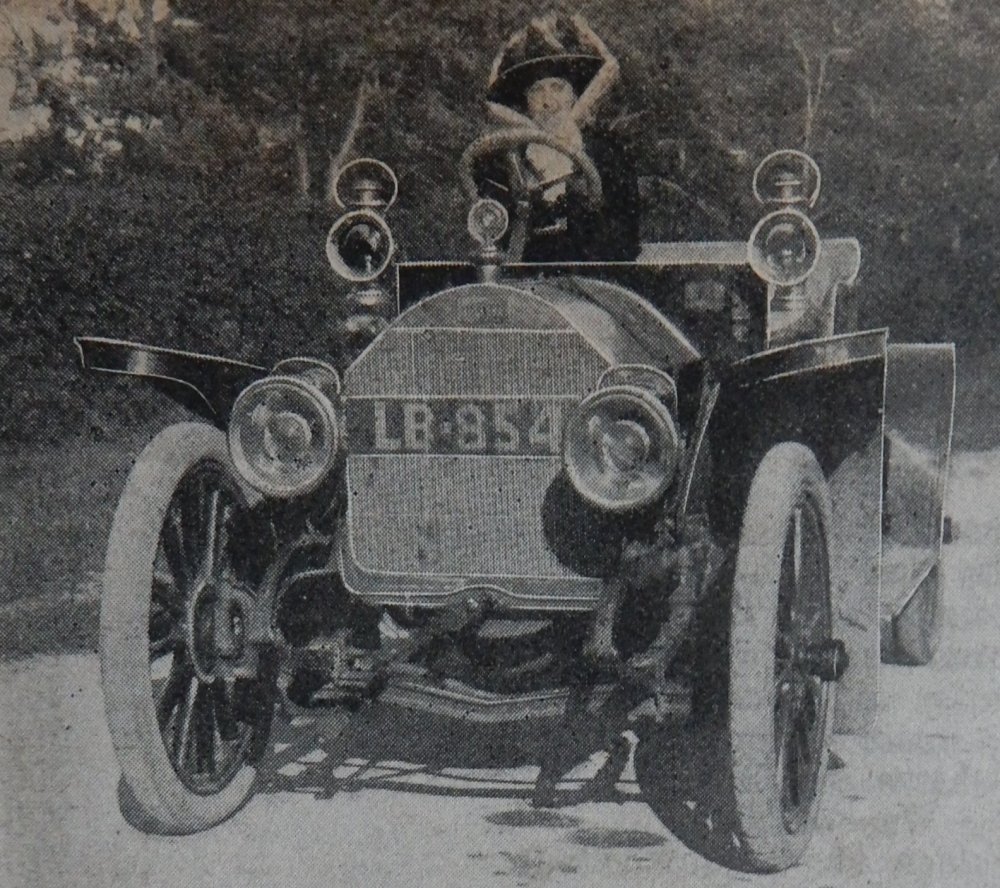 The Fiat was possibly an early 1904 model but more likely the 1906. The cost of the basic model in the USA was US$6500 (today’s equivalent US$167k), so the family must have had money.  She also persuaded the short-lived Isle of Wight Express Motor Syndicate Ltd to let her drive their Milnes-Daimler and Thornycroft buses in Ryde, an achievement which gained her a photo in the Illustrated London News.

During these pre-World War 1 years a number of local and national press articles reported on her motoring prowess as a competent driver and rally participant as well as passing the Royal Automobile Club’s exams in driving and car mechanics. She also competed with the British national ladies teams in 1907-11. All these activities speak of a young woman with access to considerable money, and photos of the time show her as a beautiful young woman dressed in the high Edwardian style. In 1910 she passed the Portsmouth Municipal College’s local examination in “heat engines” which suggests that, at the age of around 30, she was seeking a more formal education to support her engineering interests. She is also said to have gained a pilot’s licence and her interest in flying would have been quite typical of the wealthy young woman of the period. In 1910 she entered a competition in Flight 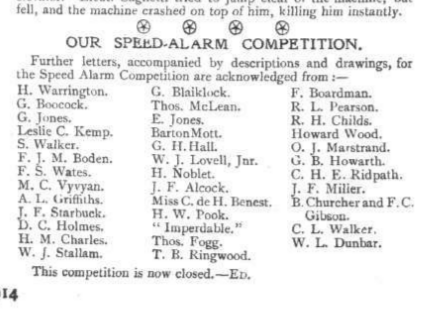 magazine, to design “A speed alarm for flyers”, and her design was printed in the magazine. She was the only woman entrant among 38 men.

During this period, Cleone attended meetings of the Incorporated Institute of Automobile Engineers, by a special dispensation, as evidenced by the personal letter from Institute member, Douglas Mackenzie, which said that “Despite the official ban we shall always be pleased to see you”. It is likely that it was at these meetings that she came to know eminent engineers such as Colonel Rookes Crompton, the electrical engineer, and Sir John Thornycroft both of whom were supporters of women in engineering, Crompton becoming a close friend. Eventually the Institute changed its rules and Cleone is thought to have been one of the first women admitted as an associate member, in about 1920. 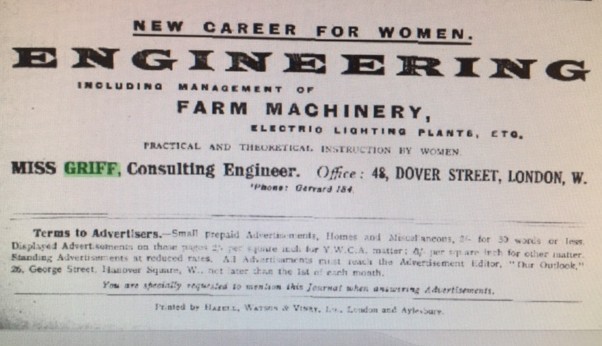 In 1915 she had her first, but short-lived, attempt at setting up her own business. Using the name Miss C. Griff, she advertised herself as a consultant engineer, offering expert advice on automobile, electrical and mechanical engineering matters. She opened a garage workshop for lady motorists, behind 48 Dover Street, Mayfair, providing mechanical repairs and courses in elementary and advanced motor mechanics with evening lectures on industrial and factory practice, aimed at women hoping to become supervisors in munitions factories. This was one of quite a number of such establishments set up by wealthy lady motorists, such as the Hon. Gabrielle Borthwick, whose garage a few streets away had rather longer success.

The Women’s Engineering Society’s journal, The Woman Engineer, reported that she had worked as “An Aircraft Engine Inspector at the time that the British Thomson-Houston Co were first making an English magneto for Air Ministry requirements during the early years of the war. During the war held the responsible position of a Government Aircraft Inspector with Messrs. Vickers, Ltd.”. Having come to live near Coventry for this war work she remained living and working in the area until at least 1928.

Advert in The Woman Engineer

Her increasing engineering and metallurgical expertise led to her election to the Iron and Steel institute and the Cast Iron Research Association, in in 1921. In 1922 she established her second company, The Stainless Steel and Non-Corrosive Metals Company Limited, at 14, Weaman Street. Birmingham. Other directors were The Hon. Gabrielle Borthwick and Lady Gertrude Crawford. These two aristocratic ladies, as well as being interested in engineering, were also allied with the esoteric organisation, The Golden Dawn. A former foundry manager, Miss C. Davis joined her in 1923. The company specialised in small, cast items such as buckles, and ornamental items for clothing, furniture and door handles, using the stainless steel colouring method she had devised. Also more utilitarian items such as lamp reflectors and railway carriage fittings. Again, this unusual enterprise managed by and employing women attracted worldwide press coverage. However, the company was not a financial success and was officially wound up in December 1925.

The post-WW1 years were very difficult for women who had acquired professional engineering skills and, in many cases, held responsible positions in the engineering professions during World War 1. Most were dismissed summarily when hostilities ended, under the 1919 Restoration of Pre-War Practices Act, and struggled to find appropriate work. This led to the formation of The Women’s Engineering Society (WES) in 1919 and Cleone joined shortly after (using the name Miss C. Griff throughout her membership), and was elected to the chair of the WES Committee in 1922. She was very active in the society until 1928, organising the Birmingham branch which sometimes met at her home in the Four Oaks suburb of Birmingham.

She also contributed regular articles to The Woman Engineer – Motoring and Aviation Notes – from 1923-27, and gave six broadcast talks in 1926-7 on BBC Radio (Station 5IT, Birmingham), for the “Afternoon Topics” slot aimed at housewife listeners, on various aspects of engineering. Her talks on the use of electricity in the home would have supported the work of the Electrical Association for Women, a sister organising of WES, set up to help housewives become familiar with domestic electricity at a time when electrification was slowly spreading across the country. In 1928, Miss C. Griff suddenly cut her ties with WES without explanation and seems not to have used this name again.. Her sudden departure may been due to an urgent need to go back to the Isle of Wight to look after her widowed mother who died in 1930, leaving almost no money. Having used the name Griff professionally and even for the official Electoral Roll for 1923-25, it is curious that she abandoned the name.

Entry in the 1939 ID card register showing her interest in Gyrotillers.

At the outbreak of World War 2 Cleone was living (under her birth name again) at Warrington House, Olney, Buckinghamshire with Frederick J. Crinage. He, too, was a mechanical engineer, of about her own age, whom she may have first known when he lived in Ryde in about 1911, when he was working as an “oil engine expert and traveller”, by which we may surmise he knew about diesel engines and was a travelling salesman. In the 1939 registration for ID cards she described herself as a “Gyrotillage executive”, mechanical engineer and metallurgist.

Gyrotillers were the heaviest agricultural machines of the period, used for ripping up heavily overgrown land to be brought back into farm use for the food growing effort. It is not clear whether she was offering her self as an advisor or whether, at the age of 60, she considered herself able to drive one of these monster machines. If she was an ‘executive’ in the modern sense perhaps she was working (as a sales agent??) for John Fowlers of Leeds, the main manufacturers of these beasts. The 1935 version had 170hp diesel engine. The earlier ones had wheels but later ones had crawler tracks. Between the wars a lot of farm land had been more or less abandoned and the owners had to be pretty much forced to bring it back into food production. The gyrotillers were used to rip out thickets of bushes, brambles etc, as demonstrated here by Lloyd George. I dread to think what the weight of these monster did for soil compaction.

She is also listed in the 1939 Register as being in the Women’s Land Army although at 60 it seems unlikely she would have been actually working as a farmhand.

She remained living in Olney until 1953 and from then until her death she lived at various addresses in Parkstone and Lymington, Dorset. Some of her friends from earlier times, such as Gabrielle Borthwick and Gertrude Crawford, lived not far away. She died on 23 December 1963, of cancer of the heart, in Poole General Hospital. Her death certificate gives her as a spinster and her occupation as “journalist”, living at 35 Danecourt road, Parkstone, Dorset, having lived previously at 3 Nelson Place, Lymington. She left a tiny sum of money to a friend in Salisbury but seems to have had no close relatives, nor many friends in evidence at the end. [Postscript: a great niece recently made contact to say that the family were contacted by a social worker to try to get her some financial help but the great niece does not know what came of that contact. Cleone apparently claimed that her poverty was due to not receiving a pension from the Soviet government she believed she was due from having helped during the Russian Revolution – there is no evidence that she ever went there though.]

Miss Cleone de Heveningham Benest/Griff carved out an engineering career for a woman who had had little formal technical education at a time when this was still possible. Her story retains many mysteries: why she went under the name Griff for several years and where the money came from to pay for what must have been extravagantly expensive activities in Edwardian times. Nor is it clear how she financed the later part of her life, given that her father seems to vanish before she was a year old and her grandparents left nearly nothing. A beautiful woman, she seems to have been able to gather influential friends about her in the first half of her life. Whilst not an engineer of whom we could say that she achieved anything significantly in terms of the advancement of engineering, nevertheless she was a significant pioneer of her time and must have been a conspicuous role model in the press at a time when the next generation of girls were growing up who would go to universities, get engineering degrees and have full professional careers up into the post-WW2 era.